Constitution Day: September 17th, 1787 – A Pivotal Point in US History

Clearly, one of the most significant events in American History was the writing, signing, and ratifying of a new Constitution by our fledgling nation.  The date this powerful document was signed by the majority of delegates to the Constitutional Convention in Philadelphia was September 17th, 1787.  It was a pivotal point in history, not only for the United States, but for all countries.  The entire world was watching to see if we could come together as a nation – 13 independently led colonies who had just succeeded in a revolution for independence from Great Britain.  Did you know that most of the world expected us to fail?  We have certainly surprised them!  This deserves recognition and commemoration every year on that anniversary date of the birth of a new form of government.

To commemorate Constitution Day this year on September 17, 2014, we have designed a new classroom activity for you!  It’s called a 21st Century Treasure Map.  Using primary sources that are converted into QR codes, your students can create a modern day interactive map on virtually any topic.

The complete instructions, as well as a sample 21st Treasure Map – are below – in this post.

STEP 1:  Choose your topic and divide your students into groups of 3-5 students.

STEP 2:  Have each group of students select a (unique) primary source from the Library of Congress to expand the lesson plan on your topic: http://www.loc.gov/teachers/

STEP 3:  Together, create a QR code for each primary source – photo, audio, or video.  Follow these instructions from the TPS-GSU website:  Link to QR Code Instructions

STEP 4:  Print each QR code on a different color of paper, taking care not to shrink or alter the QR code (which might prevent it from functioning properly).

STEP 5:  Attach the various QR codes to one large piece of paper (the map) in a logical sequence based on your topic.  This might be chronological or geographical in order.

==>NOW, it’s time to discover the TREASURE within your 21st Century Treasure Map!

T:  One member from each group will TELL about their primary source using the QR code.

R:  One member from each group will RELATE how this is significant to the topic.

E:  One member from each group will EXPRESS how they might feel in this situation.

A:  One member from each group will ASK a question for another student to answer.

S:  One member from each group will SHOW a physical reaction to the primary source.

U:  One member from each group will state something new the Treasure Map UNCOVERED.

R:  One member from each group will RECOUNT the meaning, deepening it if possible.

E:  One member from each group will EVALUATE the overall process of a Treasure Map.

==>Action:  Please let us know how this Teacher’s Tip served you and your students!

Here is your 21ST CENTURY TREASURE MAP for CONSTITUTION DAY!

To create the 21st Century Treasure Map Commemorating the signing of the Constitution on September 17, 1787, we first located a primary source map of the City of Philadelphia as near in time as we could find (or prior to) the date in time of the key event within our Treasure Map.  Once you click to the Library of Congress link, you can find an enlargement for printing. (In some cases, you may prefer to use a current local map as the background for your 21st Century Treasure Map, depending upon the topic and theme of the Treasure Map.) 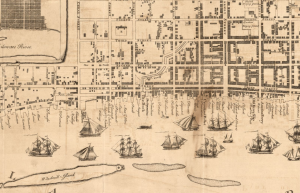 Map of the City of Philadelphia, 1762

Next, we researched the key persons, places, and events involved in the Constitutional Convention.  This particular historic event is rich with primary sources to select from as the Treasure for our map, so we narrowed our choices to only three for purposes of creating this sample.

1st PRIMARY SOURCE TREASURE:  The Gathering of Delegates at the State House. 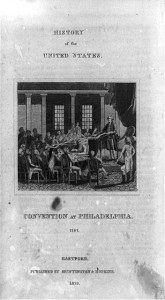 The Virginia Delegation, led by James Madison, arrived first on the scene at the State House.  In that period of history, travel was not as certain as it is today.  Although the Convention was to officially convene on May 14th, very few were actually present on that date.  Because many delegates did not arrive for several days due to the difficulty of travel in the late 18th Century, the Convention could not get underway just yet.  It was necessary to secure a quorum of seven states, which was achieved by May 25th, when the Conventional officially began in the Philadelphia State House.

While awaiting the majority necessary to begin the convention, James Madison went to work with his Virginia delegation in crafting an initial document which became known as “The Virginia Plan.”  George Washington was unanimously elected to serve as president of the Convention, and by the time the other delegates arrived and the Convention began, there was a coalition of support to use this as the “blueprint” for drafting the new Constitution.

2nd PRIMARY SOURCE TREASURE:  Printing of the Initial Draft of the New Constitution 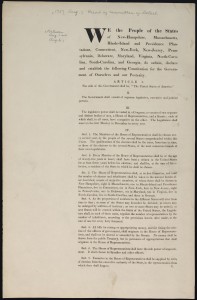 Once the delegates to the Constitutional Convention had reached  consensus regarding the initially agreed upon concepts, the scribbled initial draft was sent to a printer to provide the delegates with an official draft document as they proceeded into the final approval processes.  It was crucial to use a printer that could be trusted to keep this document safe and private until it was officially signed and formally submitted to the states to be ratified.

This excerpt from the Library of Congress Collections, titled To Form a More Perfect Union, tells the story powerfully:

“On July 26, 1787, after two months of fierce debate over the structure and powers of a new federal government, the Constitutional Convention was ready to commit its resolutions to writing.  Appointing a ‘committee of detail’ to draft a written constitution, the Convention adjourned until August 6.

To prepare themselves, the committee first studied the Convention’s resolutions, state constitutions, the Articles of Confederation, and other applicable reports and documents.  Then, Edmund Randolph of Virginia wrote out a rough draft of a constitution, which the committee then discussed. James Wilson revised Randolph’s draft, the committee reviewed it, and a clean copy was sent to prominent Philadelphia printers John Dunlap and David Claypoole.  The Convention told them to print just enough copies for use by the delegates; the draft was to be kept secret to avoid controversy.”

As it turns out, the entrusted printer left quite a legacy for our history.  John Dunlap served as an intern under his uncle, and then became the owner of this print shop.  They became the publisher of the first successful daily newspaper in American History.  This print shop and their first daily newspaper can be traced through history to what is currently published as The Philadelphia Inquirer.

The final part of this fascinating story of how our government was formed, may surprise you. Did you know that most of the delegates from two of the eleven states left prior to signing the Constitution?  In fact, only 39 of the original 55 delegates ended up signing the final document.  This quote by Benjamin Franklin offers an explanation:

“I confess that There are several part of this Constitution which I do not at present approve, but I am not sure I shall never approve them. … I doubt too whether any other Convention we can obtain, may be able to make a better Constitution. … It therefore astonishes me, Sir, to find this system approaching so near to perfection as it does; and I think it will astonish our enemies…” ~Benjamin Franklin (Speech of Benjamin Franklin)

Signing of the Constitution

The Convention re-convened to review and debate the official print of the first draft of our new Constitution on August 6, 1787.  After a month of discussion following the re-convening of delegates with the printed draft to review and debate, a consensus among the majority of delegates was finally reached by agreement to postpone the writing of the Bill of Rights until later date.  The draft was then placed in the hands of the Committee of Style and Arrangement, for which Gouverneur Morris is credited with the title of “penman of the Constitution.”

The Constitutional Convention finally voted in favor of this last revised draft on September 17, 1787.  Then, it was to be submitted to the states for final ratification, as was ordained within the Constitution itself.  The final state needed to ratify the new Constitution was New Hampshire as the ninth state out of thirteen.  Congress was informed of this momentous news on July 2, 1788.  The final act of the Continental Congress was to schedule the first federal elections of our new government and set the date when this new government would begin operation in New York City.

The Unveiling of the Finished 21st Century Treasure Map for Constitution Day!

Additional Primary Sources for Use in this Classroom Activity or with a Lesson Plan:

Here are two excellent Lesson Plans from the Library of Congress for Constitution Day:

At TPS-GSU, your expertise is our passion!

Visit our website:  http://tps.govst.edu to learn more about our professional development programs.